Albert Moo Young, a Messenger supported by AHRC New York City’s Employment and Business Services, has been named to NYSID’s 2020 Class of Joslin Outstanding Performers. These workers have demonstrated the “Joslin Awards Program’s hallmarks of independence, pride in performance and diversity through their above-and-beyond work this past year,” according to NYSID.

Albert works for the NYC Human Resources Administration (HRA) through the Preferred Source Program. HRA manages benefits and social services for millions of New Yorkers. When the COVID-19 pandemic devastated New York City, services provided by HRA became even more essential as thousands relied on the benefits it manages. Delivery people such as Albert ensured the health and safety of thousands of their fellow New Yorkers while putting themselves out on the front lines during the height of the pandemic.

Born in Kingston, Jamaica, Albert was diagnosed with intellectual disabilities upon moving to the U.S. at age 9. He began receiving services from AHRC NYC in 1994, trying out a number of different professions before finding his calling as a Messenger. He has been employed by HRA since 2005. HRA values Albert’s contributions so much that they specifically requested his presence during the pandemic while other messengers remained home for their safety. 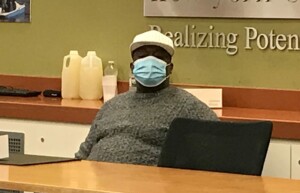 Messenger work takes Albert all over the city. He has become an expert at navigating the city’s public transit systems. Some routes may take him through three boroughs in a day, not that he minds.

“I love getting around and delivering mail,” Albert said. “Working as a messenger allows me to meet new people in the community. When I get mail to places, I feel accomplished.”

Albert said his biggest mission in life is to provide a good example for his 21-year-old daughter to aspire towards. His work before and during the pandemic shows that he is someone that we can all afford to take lessons from.