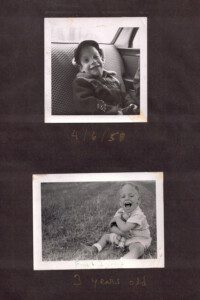 Allan and Fred Goldstein in the 1950s.

Allan B. Goldstein recalls that Sunday was visiting day at the Willowbrook State School. His brother, Fred Goldstein, was diagnosed with a developmental disability and was institutionalized there in 1957, per the medical and social recommendations of the time.

“They did clean up on visiting day, but here’s the tell,” Allan says. “There were these sparkling long green tiles, the floor was shiny, but it always stunk of urine. I couldn’t figure that out. One day, I went down the hall where people just didn’t go. I remember seeing was you’ve seen in pictures, all the cribs crammed together. I didn’t take it as a horror then—it was what it was.”

Today, Fred lives in a group home in Manhattan with his peers, looked after by caring staff members and by Allan. But for 16 years, Fred languished in the horrors of Willowbrook, isolating him from the world and not allowing Allan to develop a stronger relationship with his only sibling. Allan has written about their shared journey in his memoir Fred and Me: A Willowbrook Survivor’s Story.

The idea for a memoir came to Allan as he began to develop a deeper bond with Fred after their parents passed away, their dad in the late 80s, and their mom in 1998. Their mom was primarily responsible for Fred’s well-being until her passing, and Allan kept his promise to his family that he would become his brother’s guardian.

“The thing that drove me was our relationship and reuniting and getting accustomed to having a brother again and just recording our interactions,” Allan explains. “It wasn’t intended as a book, but it showed the development of our relationship and of each of us. It does show me changing and becoming a different person. It’s like taking pictures, except I was doing it with words.” 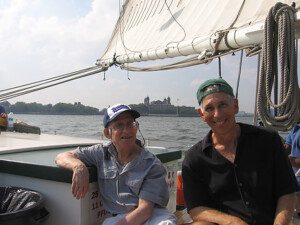 “I think AHRC NYC saved my brother’s life,” Allan says. “Being connected really matters because there are so many people waiting for that feeling. It was real, individual attention.” He adds “Life is much more interesting for him now at his group home.”

Allan works to foster additional disability acceptance through an integrated class he teaches at New York University, where he has been a longtime lecturer. He’s partnered with disability organizations to bring in the perspectives of people with disabilities and the professionals who work with them. 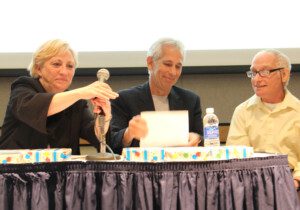 Allan and Fred Goldstein prepare to speak at a Pace University panel.

“It’s considered experiential learning, involving local community members,” Allan explains. “It’s always capped, always filled. It changed my life because a lot of the students have no idea about life with disabilities. Sometimes students self-identify as having disabilities and that’s very powerful.”

When asked how his life may have been different if Fred was typically developing, Allan says, “I would have a brother to talk to about my parents fighting all the time. I could’ve talked to him about being bullied. I think I would have been able to listen better, but I picked up a lot of empathy.  The benefit of being with Fred is learning that disability is natural and we’re all just living differently.”