Soccer enthusiasts supported by AHRC New York City have had the chance to learn more about the world’s most popular sport from an expert on the pitch as part of a partnership lasting more than four years.

“People we support who participate in our clinics have positive feedback and have been asking when the next opportunity to play will be,” said Tashi Choepel, Community Support Supervisor at Far Rockaway Day Services. “Everybody seems to love it.”

The clinics are run by Kevin Grogan, a Dublin-born coach who played professionally for years in Europe, including for top-flight clubs such as Manchester United. His under-16 Ireland team won the Euro championship in 1998.

“I was a center midfielder,” Kevin said, describing his important playmaking role. “It was brilliant to learn from the best players and coaches like David Beckham and Sir Alex Ferguson. I got great insight and learned a lot of life lessons through sport; I learned to win and lose with dignity.” 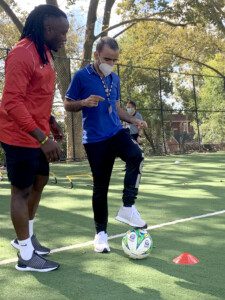 A series of injuries cut his promising pro career short. After moving to America and finding success with his own soccer academy, he wanted to share his skills with the community at large.

“Four years ago, I lived in Sunnyside, and I was doing research and found that there was an AHRC NYC office just two minutes away from me,” Kevin recalled. That office was Joseph T. Weingold Day Services, where Tashi began his AHRC NYC career.

Kevin had never taught people with disabilities before and wanted to share his knowledge with a new group of students. “I thought it was the right thing to do, and I’m absolutely delighted to have met Tashi that day,”

They arranged to have their first clinic at St. Michael’s Park in Woodside. “Kevin will tell us what drills we’ll work on before we start,” Tashi explained. “We’ll begin with light stretching, then move to dribbling exercises to teach ball control, kicking drills, and basic maneuvers and techniques to help score goals.”

Kevin brings equipment such as jump ropes, rope ladders, and cones to enhance specific skills. He says any drills he teaches are drills he would teach his everyday students. “We understand that there are different skill levels and standards of play, but we are always making sure they are enjoying the process.” 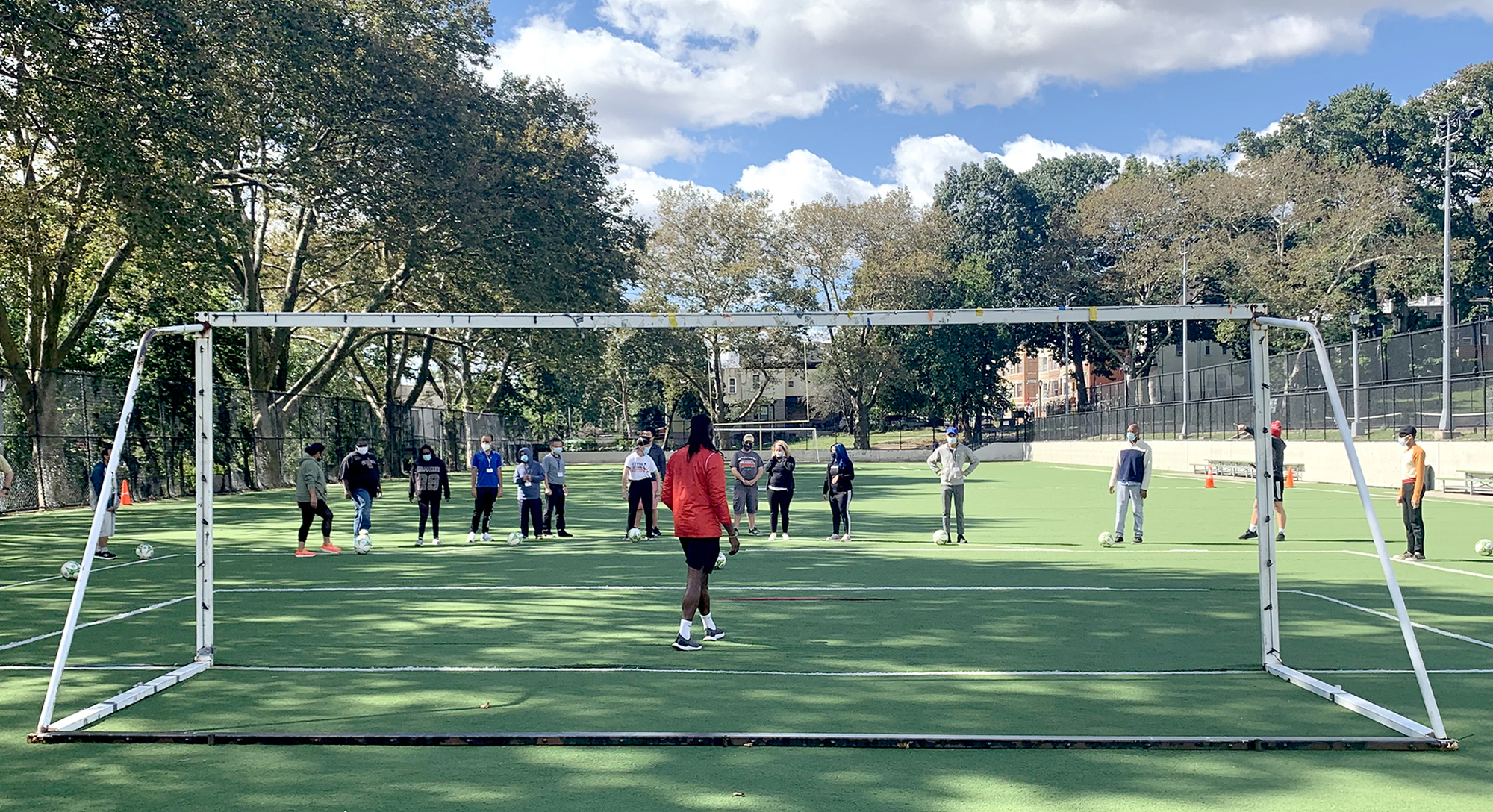 Tashi and Kevin found the clinics to be such a success that they expanded it to include other Queens-based day service programs, such as Cyril Weinberg Day Services and Far Rockaway. The clinics moved to Highland Park, which sits on the border of Brooklyn and Queens, to allow for more accessibility for all programs. 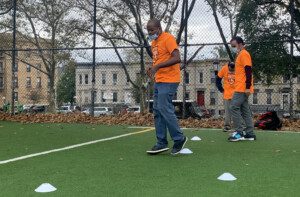 Malcolm Gaffney practices a drill to improve his running and coordination.

The clinics took a pause upon the onset of the COVID-19 pandemic before returning in the summer and early fall of 2021. Players and coaches alike are eager to once more reap the benefits of playing as the weather improves and when safety can be ensured.

“Soccer is good for our health—it’s one of the best ways to get a full-body exercise,” Tashi explained. “Mentally, it’s very stress-relieving. You go into an open field and release all of your negative energies.”

Kevin agreed with his colleague, saying that the benefits of teaching soccer extend to the coaches, too. “It’s about getting together with friends in the fresh air,” he said. “I feel that I’ve been fortunate in life to have been able to play at a high level and now I do well from a work point of view. We should all be conscious of giving back—I know football, so my way of giving back is teaching true football and true sport.”