The book was The Call of the Wild and the challenge for Csenge Bodi was how to maintain a relationship with AHRC New York City’s Book Club while returning home to Transylvania, Romania, for the holidays.

“I didn’t want them to miss all that time and we hadn’t finished the book,” said Csenge, a sophomore at St. John’s University. So, at 6 p.m. in Romania, she conducted the 11 a.m. Book Club. After explaining why it was dark in Romania, Book Club resumed without a hitch. Csenge also runs a Name that Country program which explores geography and culture.

“Despite my busy schedule, it’s just as much a joy for me as it is for the participants,” she said. “It’s relaxing and makes an impact on their life and mine.”

When AHRC New York City’s in-person programs could not provide in-person services last March and had to pivot to virtual options, a core group of community partners from around the U.S. and abroad, offered to provide virtual courses for the individuals we support. Community partners are currently offering more than 60 courses per week, in addition to nearly 65 mock interviews per week for individuals seeking employment. The average class draws 20-30 people we support. 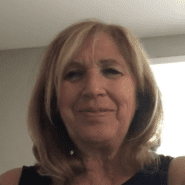 Karen Zuckerman, AHRC NYC’s Director of Community Partner Engagement, recruited her childhood friend Karen Marano, who lives in Las Vegas, to participate. If it’s Monday, it’s Movie Trivia, followed by Word Games. On Thursday mornings she runs a Book Club and Karaoke with Karen Z’s husband, Howie. “I’ve gotten to know a lot of people now,” Karen M. said. “I can’t wait to come to New York and meet them all in person.”

Ben Zisfein attends numerous classes via Zoom. During a recent Movie Trivia session, he rattled off identified photos of actors and actresses, titles of movies and directors. “Karen Mareno’s class is definitely good,” he said. “I like guessing movie trivia and enjoy the Karaoke,” too.

Karen M. takes her commitment seriously. “It’s important for you to be there,” she added. “Have fun and watch them smile. When they’re having fun it’s a good thing.  I really look forward to it.”

In Trinidad, Aqueena Alexander, a student at St. John’s University Ozanam Scholar Program, said when she read AHRC NYC’s mission statement, “It really spoke to me. I had never thought about adults with autism or other disabilities.” A computer science major with a focus on social justice, Aqueena started participating last fall, starting with safe science experiments. Today she participates six hours a week, conducting Brain Games, Book Club, and Poetry.

“It has been a source of my happiness,” Aqueena said.

“If there is a silver lining of the pandemic, it is that we have been able to increase our weekly programs supported by community partners nearly fourfold,” Karen Z said. “Many people are more willing to participate because they can do so virtually, which takes up less of their busy lives. Also, they can live anywhere, not just in New York City. They facilitate programs for the people we support, by sharing their own interests with them.”

From New Hampshire, Les and Ida Stanger-Mildenberg have their own unique following. Ida’s step-son, Jon Zalman, had volunteered to teach chess to individuals at AHRC NYC. He thought she and Les would enjoy participating remotely. Today, Ida takes people around the country, providing virtual tours of different states. “Did you know the Piggly Wiggly in Oklahoma was the first supermarket in the U.S.?” she asks. It’s tidbits like this, as well as introducing attendees to egg creams while visiting New York, that keep people engaged. Using YouTube, they’ve toured the Florida Everglades, famous statues and sites in various states, and during the holidays, she took them to Europe to visit the famous Harrods’ windows. “I want them to leave excited, which they are,” Ida said.

Meanwhile Les shares his passion for wrestling with a group of diehard fans on a weekly basis. “When it comes to wrestling talk, I have this knowledge and am always happy to get them interested and talking.”

Antonia Cartwright had participated as a yoga instructor in 2019. She moved from New York City to Colorado last year. While looking for opportunities to give back to the community, she came across AHRC NYC. “It blew my mind to have the opportunity to partner with them again,” she said. “You’re probably going to get a lot of personal reward and feeling like you’re helping. Be prepared to make a longer commitment.”

As a global studies major at Long Island University, Megan Leonard has studied abroad in Costa Rica, Europe and Australia. Last July, she decided to move to Puerto Rico for her fall semester. Her first internship was to conduct a campaign to raise awareness about and change the perception of people with disabilities. Partnering with AHRC NYC remotely, was a great fit. Conducting Physical Fitness, Word Games, Professional Development, Mock Interviews and Nature Club classes has provided unexpected benefits.

“I love it,” Megan said. “My favorite thing to do is have a Zoom class full of participants.”

Kelly Wiggins, a Project SEARCH Skills Instructor, said the students enjoy seeing community partners logging in from a variety of places. “At a time when we mostly have to stay home, these partnerss are helping our students see that the world is so much bigger than New York City,” Kelly said. “Their perspective, activities, and level of engagement with our students is adding so much variety and depth to our virtual classes.”

As she nears graduation, Megan hopes to teach English or another language abroad. “If I could work the Nature Club and Word Games into my job that would be ideal,” she added.

Many thanks to all of our community partners, especially Robyn Ufer, who is leading the Mock Interviews, and her assistant, Christian Stephenson. Special thanks to all our partners, including CapitalOne Bank, HSBC, Google, VolunteerMatch.org, Visit.org, St. John’s University and Sarah Lawrence College.

For staff interested in offering any of these programs to the people they support, please contact Karen.