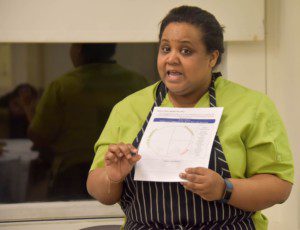 Chef Mireille began the session by asking for a pledge from everyone in the class. “We all have different tastes, but just because something a little new or different doesn’t mean you shouldn’t try it,” she said. “It may turn out to be one of your favorite foods! Is everyone going to promise that they’re going to try at least one bite of everything we make today?!” The class responded with a resounding “Yes!”

The chef continued by using her personal experience as a demonstration of why portion control is critical to healthy eating habits. “Many people, myself included, come from cultures where rice should be at the center of the plate, but your plate should always have more fruit and veggies. Rice should only be a quarter of your plate,” Chef Mireille explained. “Fruits and veggies fill you up without all the fat and other bad stuff.”

Chef Mireille said that it is most important to include protein as part of every meal and asked for examples of foods, aside from meat products, that contain the essential nutrient. These included beans/legumes, nuts and seeds, and dairy products. Martha Perez, Employment Skills Coordinator from Employment and Business Services – Manhattan, added that plant-based milk and milk from animals other than cows also contain protein while avoiding the lactase enzyme that many are unable to digest.

To avoid cross-contamination, Chef Mireille broke the class up into separate stations to assist with the cooking: one group worked to create the fruit and yogurt parfaits, one group assisted with chopping vegetables, while another prepped the chicken breasts by cutting them into small strips. 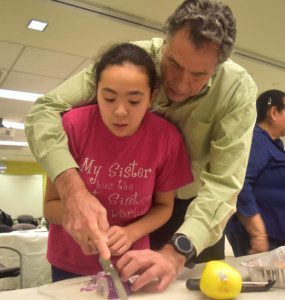 Don Celentano and his daughter Ciara chop an onion

Knives are one of the most important tools in a kitchen, but proper technique must be used in order to avoid injury to the knife-holder and those surrounding him/her. Chef Mireille provided useful advice to prevent cuts and worse, such as using a bear claw grip on the item that is being cut, (thus hiding the tips of fingers and nails), not allowing the knife to leave the front of the cutting board when chopping, and making sure to hold the knife blade down and at one’s side when walking.

When the veggies and chicken were prepared, Chef Mireille and others in the class began manning the pans to sauté the food. The chef said that “people often overcook their vegetables” and encouraged the class to heat their vegetables until fork-tender to avoid mushiness. The chicken breasts were cooked thoroughly until they could be cut in the middle and did not have any pink meat showing. Finally, the chicken and veggies were put together in the same pot with soy sauce, freshly minced garlic, and spices to complete the stir-fry.

Chef Mireille ended the class by stating that while many may not have experienced traditional Asian flavors such as those featured in the stir-fry, it is important to have an open culinary mind. “Never judge another culture by their food because they probably think some of the stuff we eat is weird, too.” 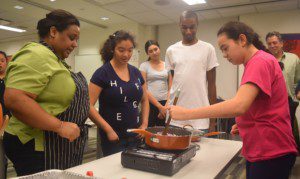 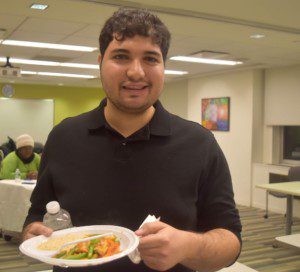