AHRC New York City’s IT professionals have always been instrumental in ensuring the ability of AHRC NYC programs to function electronically and securely. This was never more apparent than in the early stages of the COVID-19 crisis when IT assisted a countless number of their colleagues and people supported by providing access to remote working opportunities and keeping AHRC NYC’s software systems up and running.

John DeFreitas, Associate Vice President for IT Services/Security Officer, said “IT immediately recognized the state of urgency and quickly moved into high gear by acquiring laptops, setting up telecommuting and collaboration platforms, and providing staff assistance necessary to support agency care and remote operations. It was all done in record time. I’m proud to be a member of this exceptional team.”

“I think all members of my team did what they needed to do in support of AHRC and our push to telework enablement,” said Peter Yau. “I’d like to recognize them all for their part: Peter Chan, Sheng Li, Raymond Maksoud, Karif Osazuwa, Dennis Shadbera, Mary Tsang, and Matthew Yang.”

On Friday, March 13th, Peter, Sheng, Raymond, and Dennis were able to purchase and transport what Peter jokingly described as “the entire Microsoft store” to ensure that many staff members could work remotely and observe social distancing guidelines. “I’d also like to specifically recognize Sheng and Karif for creating much of the telework documentation that enabled our AHRC NYC colleagues to successfully telework and the extra hours they stayed to set up laptops and install scripts,” Peter said.

Karif Osazuwa said that IT staff had to work quickly to set up remote working opportunities. “There was a Thursday or Friday where everything went wild,” he recalled. “We started to repurpose all of the laptops that we usually give out for trainings and set those up to be used remotely. We worked with people to get home computers set up with a VPN. On top of that, we made guides for everything to assist staff moving forward.” 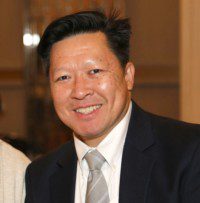 Christopher Chung said that IT staff and external partners working on AHRC NYC’s billing applications and other software systems, who are typically behind the scenes, deserved special recognition. “We have to thank the Application Developers that spent many hours and nights generating reports to track staff and people we serve as well as thank Shirley Lei for the quick turnaround of creating the retainer day bills so staff can continue to get paid during this crisis.”

Karif said that he has been impressed with how operations have smoothly continued. “After that first week, now it feels like things have settled down a bit. People have gotten a little more situated and used to their new working environments,” he said.

Peter was humble in accepting praise for the IT department’s critical service. “The true heroes aren’t us–it’s the frontline direct care workers who take care of our guys in the residences and programs.”