A Broadway dancer whose hips eventually failed him is evolving amid the COVID-19 pandemic. Now Johnny Anzalone finds himself in a new position, teaching chair yoga and mindfulness remotely to adults with intellectual and developmental disabilities from AHRC New York City. Once the pandemic hit and programs closed a year ago, Anzalone, who had been teaching for AHRC NYC in-person for two years, shifted to remote instruction.

Never Misses a Chance to Teach

It’s a perfect fit for Anzalone, who helped raise his sister Theresa, 42, who has Down syndrome. It’s that personal connection and his theatrical flare that keeps the group going. You can hear the passion in each session.

“Come on! you’ve got this! Yes!” are just some of Anzalone’s choruses in his weekly class. 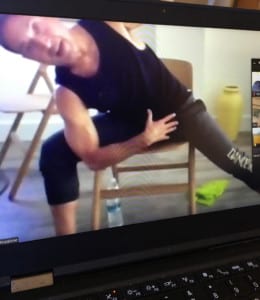 And with it also comes some challenges. One participant did bicep curls with one arm while eating a sandwich in his other hand. Some participants lie down and relax, while others do all the work. Then there’s the occasional background noise of a phone call, a family member talking, or other distraction. Anzalone keeps it going, only occasionally having to mute people.

He seldom misses a class. Recently, while traveling to visit his mother and Teresa in Louisiana, he insisted that he would arrive in time to make class. It wasn’t until he landed late, of course, that he agreed that he couldn’t teach that day. Anzalone doesn’t want to let the group down and he knows how important routines are for people with disabilities.

One of the students, Ned Bealy, emailed Karen Zuckerman, Director of Community Partner Engagement at AHRC NYC, asking, “Could you find out from (Johnny) and let us know by email if we will be having Thursday chair yoga class? No Thursday is complete without Johnny.”

Upon meeting Anzalone for an interview, Zuckerman knew he would be a great fit. “He had a big smile on his face,” she said. “He was full of life and I felt his energy.”

After 17 years of wowing Broadway audiences and crowds around the world in shows including Cats and La Cage aux Folles, Anzalone decided to turn to teaching and the more holistic side of life. That’s not lost on his students.

“Johnny is always there to support us and to push us along,” Bealy said. “Johnny also lets us go at our own pace. One part of the class that I like is the fire log pose, as well as “thread the Ned’Johnny renamed it–actually it’s thread the needle, but you get the idea.”

Switching up each class, focusing on different muscles, keeps classes fresh. Some days, he’ll mix in free weights. “Sometimes on non Chair Yoga days, I hear Johnny in my mind telling me to push on,” Bealy said.

Anzolone attended Buddha school, which he said, “went against everything it means to be Italian.” He explored how he could start doing things in his life that were contrary to what he had already accomplished. “That’s when life unfolded,” he said. Anzalone recalled reading the words of a guru in a book “Get ready for life — death, disease and the end of a job,” he said. Anzalone was experiencing all of that — he had lost his teaching job; his father was going into a nursing home after a fall, and his dog of 18 years died. “The guru would say this is one of the most powerful moments in life,” Anzalone said. “You’re becoming a warrior and you’ll get your stars and stripes.”

Life became easier. He has been teaching yoga and dance. In Florida, where he has spent much of the pandemic, he led a complimentary dance class to vaccinated health care workers. He’s teaching an advanced girls’ dance class and started another session for their mothers. In mid-March, he learned he could return to teaching classes at a New York City gym.

“Bringing Out the Best in People”

Anzalone focuses on the AHRC NYC group’s physical and mental fitness. He occasionally throws in his dance terms like “plie” and encourages students to “point your toe like a dancer.”

He suggests that when they feel bad or are upset, to use a handwashing movement and gently wash it all away. ‘You will feel better,” he says. “I want them to understand in a simple way that you can learn a lot through pain and pleasure,” he adds citing Buddhist and yoga principles. “I try to weave little lessons in.”

“I feel that if it wasn’t for lockdown and doing all these Zoom yoga sessions I wouldn’t have wanted to do the class,” Bealy said. “The lockdown brings out the best in people and gets us to be more active.”

At the start of another class, Johnny discussed the concept of “planting seeds.” “Get out in the garden and pitch seeds,” he said. “Watch what comes up. It’s fun.” It’s precisely what Anzalone continues to do.