AHRC New York City’s successful partnership with HSBC, one of the leading financial services companies in the world, has led to dozens of people supported and staff members interacting with business professionals in a wide variety of activities. August 2022 saw this collaboration continue in full force with an activity for AHRC Middle/High School students at HSBC’s Fifth Avenue headquarters and with a celebration at Yankee Stadium, where people from AHRC NYC’s Employment and Business Services were treated to food, drinks, and an exciting game.

The HSBC partnership is an initiative of Karen Zuckerman, AHRC New York City’s Director of Community Partners and Corporate Engagement. The partnership began in 2019 and has continued in both in-person and virtual capacities. 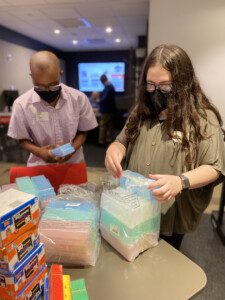 On Tuesday, August 9, four students and three staff members from the Middle/High School went to HSBC Headquarters in the heart of midtown Manhattan. They received a tour of the offices, which are coming back to life after more than two years of mainly remote work for HSBC employees. The group was joined by HSBC colleagues based in Western New York and in the Chicago area, who joined remotely and further explained their professional field.

Additionally, the group worked together to prepare bookbags and school supplies for each student in the school, courtesy of HSBC. Each bookbag contained folders, notebooks, pencil packages, rulers, and more.

“It’s a great opportunity for our students to see a beautiful workspace such as this,” said Christopher Uccellini, Principal at AHRC Middle/High School. “Collaborating with HSBC has been fantastic over the past year-and-a-half even during some of the hardest times in our lives.”

Kaycee, a student at the Middle/High School, fondly remembered a virtual cooking class she took part in earlier this year through the HSBC partnership. “I really enjoyed making and eating the mac and cheese,” Kaycee said. “These have been fun projects to work on.” 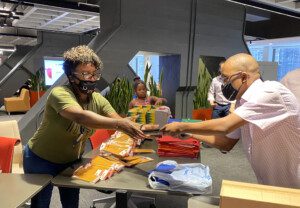 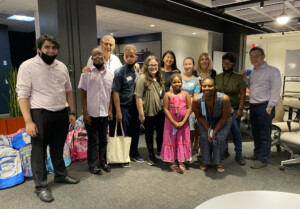 Bringing People Back Together 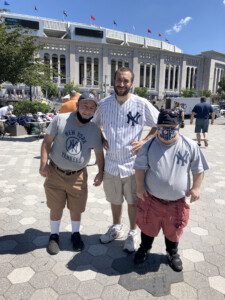 A Yankees game on Wednesday, August 3rd, provided a further opportunity for people from AHRC NYC programs to make connections and take in the best of what the city has to offer. The fun was unspoiled despite the Yankees falling in an intriguing game that featured plenty of home runs.

“My favorite player is Aaron Judge!” Jeffrey Resnick jubilantly stated. He led his peers and HSBC employees in a number of chants, to the joy of Patricia Pinto, Employment & Community Service Coordinator.

“I get such a kick out of seeing Jeffrey so happy like this,” Patricia said. “It’s great for them to have a chance to spend a day doing something like this and being treated so well.”

Kesha Terry from HSBC said that these events are a way to give back to the community as well as encourage conversation, knowledge sharing, and togetherness among disparate groups.

“Since the pandemic began, we haven’t been interacting in person with one another,” Kesha said. “Some people haven’t seen each other face-to-face in over two years. This next generation of workers will have a totally different experience of employment than our generation did, but I hope they realize the importance of meeting people.” 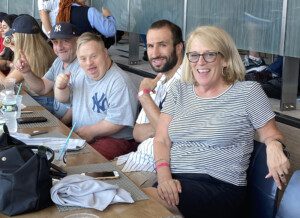 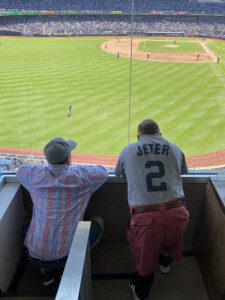 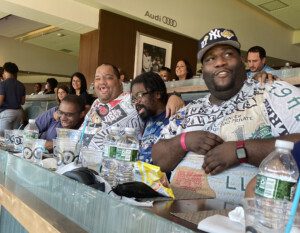