Hundreds of people receiving services, staff members, leadership, family, and friends attended the 2016 Disability Pride Parade on Sunday, July 10th. Despite the summer heat, the crowd, representing the full range of New York’s disability community, was out in force. The second annual event began at Union Square Park and snaked up Broadway before terminating at Madison Square Park. 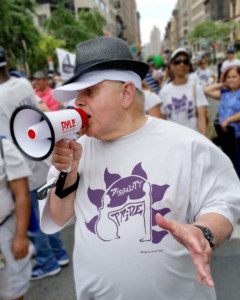 “It was good to be part of the Disability Pride Parade for a second year,” said Michael Decker, Chief Operating Officer, AHRC NYC. “Our team from AHRC New York City had great spirit and energy.”

A Day of Fun and Friends

Community Support Professional, Kareem Thompson volunteered his time to escort Tyrone Robinson to the parade, who otherwise would not have been abler to attend. Tyrone really enjoyed marching in the parade. 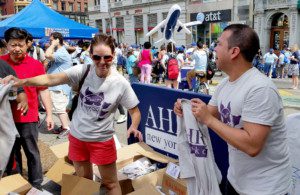 “It was nice participating with colleagues and people we support outside of a formal program, in a genuine community activity. Parades are an essential New York thing,” said Eamon O’Tauma, Facility Director, Betty Pendler Day Services: Program C.

People from AHRC NYC wore purple-and-gray shirts, designed by Brooklyn EBS‘ Jabriel Perez and selected by a panel of self-advocates.

AHRC NYC thanks Fineson IRA for hosting an after-party! Craig Becker, Manager of Fineson, and Michelle Martin, Manager at Manhattan Respite, volunteered their time to help with refreshments at the house.

“It was amazing,” Pam Minkoff, Director, Administrative Services, said. “We could see growth in the enthusiasm from last year. To see AHRC departments come together to see what we do every day is mind-opening.”