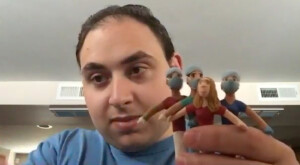 Thomas Gambaro, an artist supported by AHRC NYC programs, was recently profiled in his local newspaper, the Canarsie Courier.

“When I saw what was happening during this crisis, it felt really bad,” Tom said. “Most of the patients in the hospital could be relatives of other people or even old friends. I saw how hard doctors and nurses were working to make things better. So that’s when it hit me. I decided to take matters into my hands.”

The Brooklyn artist, who resides in Marine Park, inspired by Museum of Modern Art Educators and the AHRC New York City art staff, has molded 20 clay figurines of doctors and nurses. He works on his own, but the feedback, delivered through remote sessions, has provided an additional spark. He has sold 11 figures on his Instagram page and plans to donate half the proceeds to support frontline workers at Mt. Sinai Hospital.