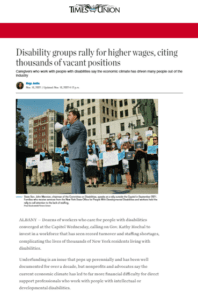 As reported by timesunion.com, dozens of workers who care for people with disabilities converged at the Capitol Wednesday, calling on Gov. Kathy Hochul to invest in a workforce that has seen record turnover and staffing shortages, complicating the lives of thousands of New York residents living with disabilities. And as next year’s budget session draws closer, they’re asking for an 8.5 percent cost of living adjustment, citing rising costs for rent, fuel and transportation that have in turn left nonprofit agencies cash-strapped and unable to compensate workers.

The state’s current leadership “has moved policies and dollars in this field in a way that hasn’t happened in a long, long time,” said Marco Damiani, the CEO of advocacy group AHRC New York City. “That is refreshing, it’s encouraging, but it’s not everything. A lot of the stars are aligned, but we want to make sure it doesn’t get cloudy.”

Damiani said they are exerting pressure from care workers and people with disabilities to demonstrate for Hochul that more action is necessary. Workers are calling for agencies to receive wage enhancements of $4,000 for every eligible employee, which would enhance hourly rates of pay by around $2.19 per hour.