AHRC New York City’s Direct Support Professionals know that working with families is a crucial part of the job. It’s important for these professionals to continually build relationships with families, in order to provide the highest quality services possible for people with intellectual and other developmental disabilities. With this in mind, Regional Centers for Workforce Transformation, (RCWT) and AHRC NYC’s Staff Training Department partnered to present the Working with Families Symposium at AHRC NYC Headquarters on Friday, July 14th.

The workshop was presented by Sonja Williams-Richardson, Region 4 (NYC) Lead for RCWT, with commentary from Kate Bini and her son Mike, who works for Hudson River Services at AHRC NYC Headquarters. It was funded by a grant from the RCWT in its mission to promote workforce transformation, utilizing the NADSP Code of Ethics and the DSP Core Competencies.

Sonja is the parent of a son with disabilities, and thus has both professional and personal experience in working with families. Through video, pictures, group discussions, and personal stories, Sonja provided DSPs and supervisors with useful strategies and information that they can apply when interacting with mothers, fathers, sisters, brothers, and all other family members.

One activity included filling out a word chart spelling out FAMILIES and using each later to correlate to an example of something DSPs provide to either people receiving services or their families. Examples included: 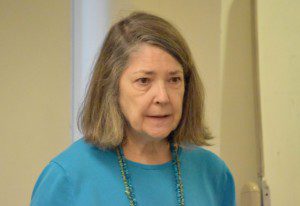 Kate Bini provided powerful attestation to the importance of family-worker collaborations. “As parents, we are the first DSPs,” she began. “We have expectations of you but let me be the first to say thank you for doing this. We understand how rewarding and how difficult this job is.”

Kate also spoke about the fears she has for the future, especially as it relates to healthcare legislation and the future of Medicaid, the latter of which she described as immeasurably important for people with disabilities. She became emotional when discussing the events leading to the closing of the Willowbrook State School and how similar progress must continue in the coming years.

“This is a partnership between us,” Kate continued. “We know the backstory of what happened before you met or child or relatives. Always remember that our sibling or child is an individual with his or her own expectations, and that’s what we need to work with.”

What Matters to Mike 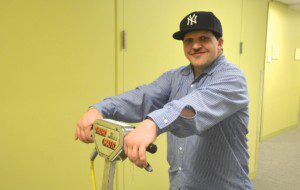 Following his mom, Michael Bini presented a PowerPoint that showcased his entire life. Michael picked out the photos himself, which he felt best represented his interests, family, and work.

Michael has experience in telling others about his life. He often speaks to new employees during their orientations, educating them about services at AHRC NYC.

Among the interests, Michael described to the audience were baseball; karate; his close relationship with his older brother; playing basketball at the YMCA; and his friendly relationship with the firehouse near his home. Mike also explained how enjoys he his janitorial work at AHRC NYC Headquarters and his daily interactions with his co-workers.

Through the support of his colleagues at AHRC NYC and his family, Michael lives a satisfying and enriching life.