Raising Breast Cancer Awareness in Far Rockaway and Beyond

On Friday, October 5th, Far Rockaway Day Center opened its doors to its neighbors and other AHRC New York City programs as it hosted the first of its kind Breast Cancer Awareness Day. People supported, staff members, breast cancer survivors, and representatives from the American Cancer Society (ACS) and the local Joseph P. Addabbo Health Center came together to offer informative seminars and tips on how to prevent the deadly disease.

“We were talking about a way to give something back to the community and include the community. Community inclusion is one of the main things we’re trying to do with the people we support. One of the things that we can give is access to information,” Nixon Darbouze, Community Support Supervisor, said about the genesis of the day’s events. “We had groups going out to subway to distribute flyers and going to our local JASA and Catholic Charities. Each group at the program has been producing something. We want to have the people we support be full citizens and giving back.” 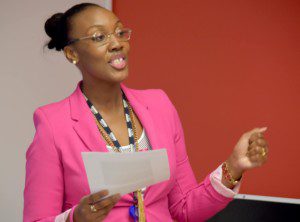 Renika Jeffrey, Facility Director, began the day by giving an overview of the history AHRC NYC and the Far Rockaway Center. “In Far Rockaway, a lot of things are so far away from us. It’s great to be able to invite you all to our facility for this first annual Breast Cancer Awareness Day,” Renika said. 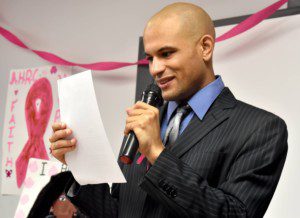 Everybody at the Far Rockaway center contributed to making the event a rousing success. Several artists helped decorate gift bags that were given out to visitors. Jesse Perkins and others recited inspiring poetry meant to encourage survivors and those stricken with the disease. Staff members prepared food and beverages throughout the day to keep guests refreshed.

Herman Pastor was invited by his niece, Community Support Supervisor Jennifer Hernandez. Herman was one of many people who got free blood pressure and heart rate screenings from a representative from the Addabbo Health Center. “Once I heard what it was all about, it was something I was interested in,” he said. “I’m a prostate cancer survivor myself. Knowing my family history, it’s important to get this information.”

Read More in the Rockaway Times

Far Rockaway Day Center was thrilled to have a reporter from the Rockaway Times come to cover the event as well! 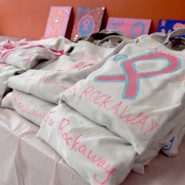 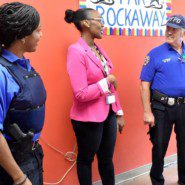 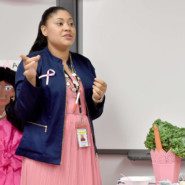 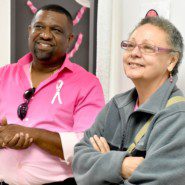