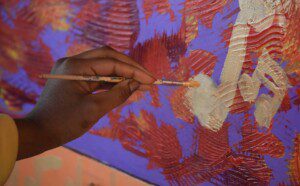 DJ Pierre paints musical notes on the side of her piano.

Djsaniuka “DJ” Pierre has previously exhibited her artwork in schools, galleries, and at AHRC NYC Headquarters, but never before on a piano. This year, DJ was one of 50 artists selected to custom design a piano for Sing for Hope, a non-profit organization that provides free instruments to underserved schools and other community hubs.

Expanding a Successful Partnership with Sing for Hope

Director of Community Partner Engagement, Karen Zuckerman said that Sing for Hope’s partnership with AHRC NYC had taken on several forms prior to DJ’s opportunity.  “Sing for Hope partners have come to residences such as Dickson-Goodman and Bloomberg Apartments to perform for our residents,” Karen said. “And last year, some of our performers at AHRC NYC programs sang and played piano using Sing for Hope instruments outside Lincoln Center.”

In December, a piano was donated by the organization to AHRC Middle/High School. Karen knew what the next step had to be. “I wanted AHRC NYC to be able to get a piano designed by one of our wonderful artists,” she said. “I knew Kings Highway Day Center had some very talented artists.” DJ’s colorful, abstract style was a perfect fit.

The tenth floor of 28 Liberty Street has essentially become a converted warehouse for artists to design their pianos.

“DJ’s really made a name for herself now“, said Lina Vezzani-Katano, an Art Consultant who has long supported DJ’s skills and ambitions, as they were stationed right by the window overlooking the area where DJ’s piano will be displayed for several days in June. 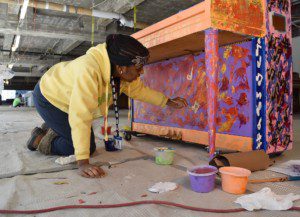 The piano is already close to completion. The paint is thick in texture and contains a wide variety of colors, with orange, red, and blue being among the prominent hues. DJ has added gold-colored musical notations prominently to the front of the piano.

As an added bonus, DJ will be able to appreciate her work more than most as she has experience playing the instrument. “Every week the music teacher comes to Kings Highway and she plays with them,” Lina said. “It usually sounds like gospel music.” DJ’s percussive humming, while she painted, was another indicator of her passion for music.

In early June, the piano will be placed at Liberty Plaza right outside the building where it’s currently housed. After a brief display period, it will then be donated to AHRC New York City’s Kings Highway Day Center, where DJ’s work will be appreciated for years to come.