Over the past few months, staff members based at AHRC NYC Headquarters have been working hard towards the completion of four initiatives integral to the organization’s continued success—transitioning MSC services to Care Coordination, increasing enrollment in Partners Health Plan, an OSC audit, and implementation of the UltiPro human resources/payroll system. Marco Damiani, CEO; Amy West, Executive Vice President and Chief Financial Officer; and Kathy Broderick, Senior Program Advisor, wanted to thank these dedicated employees with an intimate celebration at Ryan Maguire’s, a local pub near the office.

“We have to celebrate success,” Marco said. “AHRC has so many staff members to that do their job with such conviction and passion.” Marco explained that these accomplishments are directly related to the five initiatives he sought to focus on after joining AHRC NYC, including raising awareness and enrollment levels for Partners Health Plan, a successful transition to Care Design New York‘s care coordination services, quality of services, and technological initiatives through an agency information platform and a new HRIS system.

In addition to being treated to delicious food and drinks, staff members attending the event were also thanked with gifts from Ultimate Software, the company that owns the UltiPro platform.  Amy West also provided the OSC audit team with quirky gifts, including a customized tape measure.

“It’s such a diverse group of staff that we have here today,” Marco said. “Every now and then we have to stop and take a pause to celebrate our accomplishments together.” 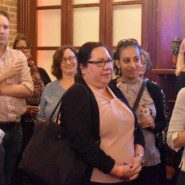 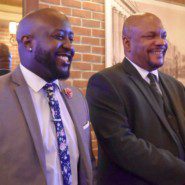 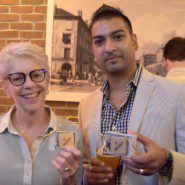 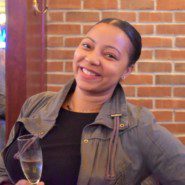