A beloved member of the AHRC New York City family was memorialized in a Queens street renaming ceremony on Friday, December 3. Tarlach Mac Niallis spent more than three decades at AHRC NYC and was the Program Director at William F. May Day Services in the Bronx before his untimely and unfair passing in April 2020 from COVID-19 complications.

In honor of his lifelong activism and support for Queens’ fully inclusive St. Pat’s for All Parade, the intersection at 49th Street and 43rd Avenue in Sunnyside is now Tarlach Mac Niallis Way.

“This is an unbelievable honor to be given, to have a street named after you,” said Gary Nellis, Tarlach’s nephew. “In a hundred years’ time this sign will still be here, and it really reinforces Tarlach’s legacy.”

An Advocate for Humanity

A prominent LGBTQ+ and human rights advocate on two continents, Tarlach was described by colleagues, friends, and family as an enlightened man with a joyous, boisterous personality.

“Tarlach lit up the room,” said Harriet Golden, Vice President for Program Operations and Innovation. “One of the most beautiful characteristics was his ability to talk and disagree with just about everything that smelled autocratic.”

Originally from Belfast in Northern Ireland, Tarlach moved to the United States in the early 1980s to “live a freer life.” He was among the first campaigners to push for full LGBTQ+ inclusion in the citywide St. Patrick’s Day parade. He was arrested numerous times over the years in his quest for equality before earning the opportunity to officially march with the Lavender and Green Alliance in 2016.

Harriet added, “His greatest passion was the concepts of justice, equity, and inclusion.  His thinking gave birth to those concepts way before others.”

Awilda Aponte, Community Support Supervisor, brought a symbol of Tarlach’s activist legacy to the street renaming ceremony. “I held the pride flag high for all to see as I imagined Tarlach saying ‘Higher and Stronger’ for all to see!” Awilda said.

A Great Colleague and an Even Better Friend

Co-workers recalled Tarlach as vivacious, unwavering in his beliefs, and an irreplaceable presence in the lives of anybody he touched. 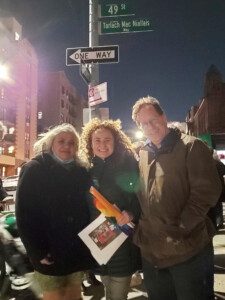 “He mastered the delicate balance of humanity and professionalism,” said Laura Cucinotta, a longtime colleague, and friend. “He was one of the strongest advocates for the people we support that I’ve ever met. You could go to Tarlach with any issue or challenge, and he would be the best sounding board.”

Tarlach’s quest for equality extended to AHRC NYC. He was the driving force behind getting the agency to officially recognize domestic partnerships and civil unions, allowing for shared benefits between same-sex couples who were not previously able to get legally married.

Laura added, “I think he was so immersed and committed to that we do that even if you didn’t agree with his philosophy, you always had to listen and honor it because you knew it came from a place of humanity, justice, and knowing what’s right to fight for.”

Outside of work, Laura said that Tarlach was a well-regarded raconteur, an always-willing singer, and a trivia and crossword puzzle whiz. “He was worldly, knowledgeable, and never wanted the party to end,” Laura added.

Michael Kaplan, now the Program Director at Joseph T. Weingold Day Services, was hired by Tarlach as a supervisor in 1996. They quickly became close outside of work as well.

“Many of us would reach out to him with difficult issues—I used to call it ‘Tarlach wisdom,’” Michael said at the ceremony. “His memory was amazing; at directors’ meetings, he would quote policy and always spoke truth to power.  He was wise, thoughtful, and fair, and always conducted himself with the highest integrity. I’m just proud that I knew him and got to spend time with him as a co-worker and my best friend.” 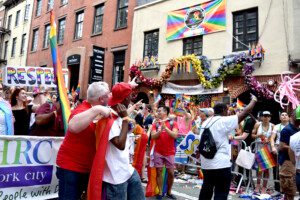 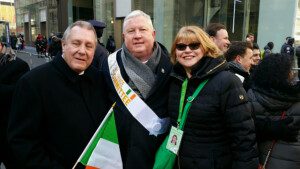 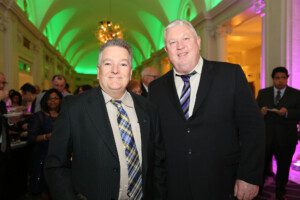