In Homer’s The Odyssey, Odysseus, preparing to embark on his titular journey, leaves the care and education of his infant son Telemachus to his trusted friend Mentor. Providing guidance and knowledge, Mentor teaches Telemachus about the world in his father’s absence.

Today, personal and professional mentors appear in every person’s life. For students in the Melissa Riggio Higher Education Program at Borough of Manhattan Community College, (BMCC) and Hostos Community College, two people who embody the definition of this word are David Alvanes and Manual (Manny) Avila Torres. 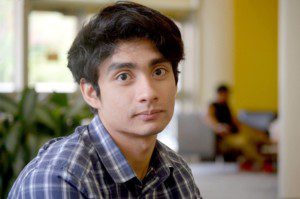 “I never worked a day in my life before AHRC, but I felt I could share my skills with our students,” David said in the BMCC staff lounge. “I wanted to be a teacher. I was fresh out of the college experience and felt I could share it with them.”

David was previously an economics student at Pace University and took Dr. James Lawler’s Community Service Learning project that partners with AHRC NYC. “Something that caught my attention was the potential of the students and a sense of responsibility for me,” David said. Upon graduating, David felt a calling and joined the Riggio Program as a Higher Education Support Professional. 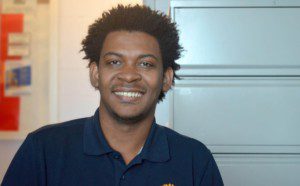 Similarly, Manny was a student at Hostos while a friend was a Riggio Program employee. “He was telling me how he went to classes, helped with homework, worked through their whole curriculum,” Manny said. “I thought he was just volunteering. I wanted to do it any way but when he said it was a job I wanted to do it immediately.”

In their roles, David and Manny assist students in a variety of ways, from taking notes to teaching time management skills to help them become fully immersed in the college experience. Additionally, both of them have created programs to further the students’ education: David with a money management course and Manny, who’s originally from the Dominican Republic, with the early stages of a conversational Spanish curriculum.

“We explain things straightforwardly with each other,” David said. “Money management can be very boring so I wanted to be creative. It’s allowing them to learn practical skills plus things like debit and credit cards.”

“So far [the Spanish class is] just spontaneous but we’re trying to develop a whole curriculum over the whole semester,” Manny said. “It started out mainly helping two students-one who doesn’t speak Spanish at all and one who speaks it but can’t write it, and she wants to send letters to her family in Peru.”

The two mentors take pride in seeing the ways in which their students have grown over short periods of time. “One student started at around the same time I did here,” Manny said. “His mom told me he now sounds like a college student, especially with his vocabulary. To me, that’s everything, that we are doing the right thing.”

“David embodies the title of mentor; he has a natural talent to connect with both the students he supports, as well as the entire BMCC team,” Jessica Giorgio, CSS at BMCC, said. “He displays creativity, patience, and such dedication each day and is always willing to lend a helping hand.”

Manny plans to continue working at Hostos while studying for a degree in business administration at Lehman College. “I want to take some social work courses while I’m there as well,” he said. “I don’t know what exactly is going to happen for me.”

Despite receiving his degree in a separate subject, David intends to continue to immerse himself in this line of work. “This field provides a reward that I can’t get anywhere else,” he said. “I would not have grown as a person if I didn’t have this experience.”