“I can’t say enough about Mike. He’s been a tremendous champion of our projects and successes over the past four years,” Gary Lind, AHRC NYC’s retiring Executive Director, said. “He brought forward all the best in all of us. He’s a true professional and a true friend. It’s clear that hiring Mike as COO was one of the best decisions I made as Executive Director.” Mr. Lind and Alden Kaplan, Senior Policy Advisor, shared humorous anecdotes of traveling with Mr. Decker across the city. 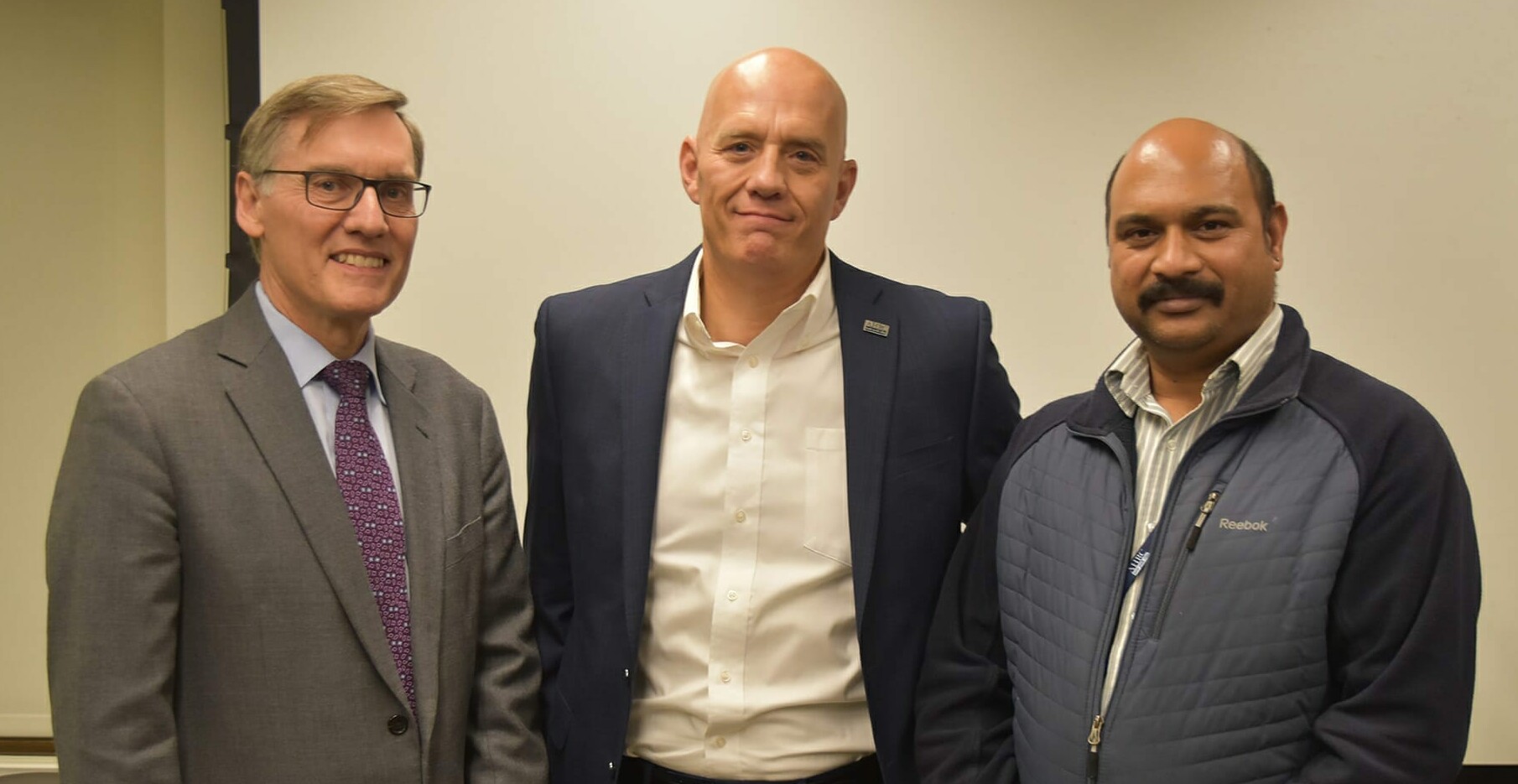 Harriet Golden, Director of AHRC NYC’s Day Services, added to the feel-good stories with some of her own and gave a heartfelt appreciation for Mr. Decker’s support. “Mike has been one of the most supportive people that I know. His concern for each and every person is really remarkable. When we lose someone, Mike is out there with us. Every two hours, he’s sending a text ‘Can I help? What else can I do?’ Having that behind you makes everyone want to pitch in. He made our ideas into reality.”

As COO, Mr. Decker frequently championed adaptive technology initiatives and how they could benefit people with disabilities. He oversaw several departments, resulting in an outpouring of praise during the goodbye celebration, from schools to adult day programs, to administration, a host of colleagues attended to wish Mike farewell as he prepared to say goodbye.

Farewell and Thank You 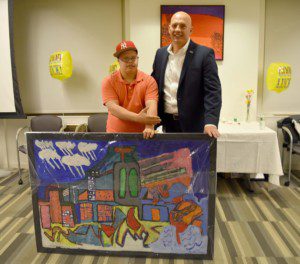 Artist Alex Torres presents Mr. Decker with a painting, thanking him for his support of AHRC NYC’s Day Services programs.

“To quote Yogi Berra, ‘When you come to a fork in the road, take it,’” Dr. Carole Gothelf, Director, Individualized Supports, said in a written message. “AHRC NYC has been the beneficiary of all you’ve brought to us when you took the path that presented itself and now you’ve chosen a new path, one that I trust will enrich you as much as you have enriched those around you.” 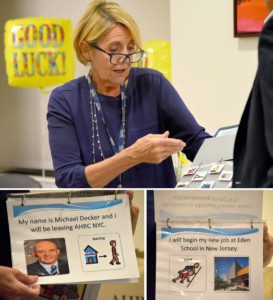 “You are on your way to doing great things at Eden Autism Services,” Madelin Rivera, Associate Director, Educational Services, said as she read from the PECS book. “Today we are honoring everything that you have accomplished at AHRC NYC. We have been lucky to learn from your wisdom and work ethic.”

Mr. Decker’s parting words were emotional, particularly when thanking his wife Liz for her support in his remarks. “I’ve cared deeply about the work you all do. I can’t tell you how proud I am to have worked with you. Your creativity, your drive, and your passion are absolutely incredible. I’ll always remember the important difference you’ve in people’s lives, including the people we support and their families, but most importantly, the difference you’ve made in mine. Thank you.”

AHRC New York City wishes Mike Decker, Liz, and their family the very best of luck as they undertake this new and exciting opportunity. We are all grateful for Mr. Decker’s contributions as COO.