Counselors Return to Camp Anne After Two Years Away

For Joanna Cleary and Chloe Antcliff, another summer without Camp Anne was unthinkable. “We were stuck in England. It was like a hole in our hearts not being here last year,” said Chloe. “There was no question about returning if there was an opportunity to come back.”

Joanna agreed with her partner, saying “Every time I would think about leaving, I just couldn’t do it. Our campers have been cooped up in their concrete jungles for almost two years! We had to make it back.”

Following the guidance of Michael Rose, Camp Anne’s Director, in concert with the ever-changing guidance from various governing bodies, they decided to take a bold step.

“I was working as a frontline worker in Ireland helping people affected by the virus,” Joanna said. “We would help from the sidelines too with virtual camp Zoom calls, any way to continue to be involved. Then an opportunity came up for us to get back to Camp Anne, and I said let’s just do it.”

“It was all very last minute,” Chloe added. “I think we found out about it in May and Camp Anne was beginning its first in-person session in July. We had to move fast.”

Mary Anne Killeen, AHRC New York City’s Associate Vice President of Camping and Recreation Services, said that both of AHRC NYC’s camps, including The Katy Isaacson Elaine Gordon Lodge, rely on the consistency of staff members who come back year after year. “Returning staff are our foundation and never more so now since we were reopening camp after being closed for a year. We typically have 40% of staff return and this year, due to Covid restrictions on travel, we had very few. But if you can only have a few, Chloe and Joe were the ones to have!”

Chloe and Joanna jumped right into making Camp Anne the home away from home its campers look forward to visiting each year. Joanna returned to her post as the Camp Anne Chef, preparing dozens of meals per day for the campers and staff. “Building trust with the families and campers includes learning their special diets,” she explained. “Mealtime is very important here.”

Joanna heaped praise on her partner after more than a month since their return. “Chloe is like a camp bible,” Joanna said. “She has been coming here for ten years, she knows everyone and where everything is. She makes the work I do look lazy.” 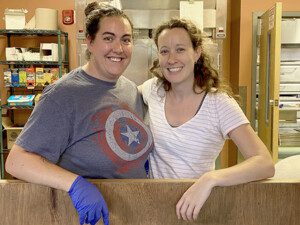 Chloe followed in her twin brother Joe’s footsteps in making her way to Camp Anne a decade ago. Joe is now a Recreation Supervisor with AHRC NYC and returns to The Lodge several times each year.

“Joe told me ‘You need to come, it’s amazing.’ I went to a fair in Manchester to go and see if I go I could. I had never worked with this population before. My first year I was in a girl’s cabin, then I moved to a boy’s cabin, and I’ve been pretty much everywhere else since.” She now helps with administrative tasks as well as maintaining close relationships with campers and contributing wherever needed.

Mary Anne said “Chloe and Joanna immediately picked up where they had left off in summer 2019, quickly establishing themselves as a great resource to staff, a familiar anchor for families, and providing an extra layer of support, inspiring confidence for all with good cheer, knowledge, and experience. We were so lucky to have them.”

Looking ahead to the 2022 camp season, Joanna can’t see herself being anywhere else. “It doesn’t have a sense of work here—it has a sense of family. It’s like you want to get back home. We’ve not been home for two years and we finally got back here.”