Dane Brandt-Lubart Presents: My Life on the Spectrum

“I’ve got magic, but they don’t see it.” Dane Brandt-Lubart opens his performance with a song, “Alone in the Universe,” and a spotlight soon showcases that magic for the room to see. “I love cooking, performing, YouTube, history, and the outdoors and its wildlife,” he continued. “Oh yes, and something else about me. Let’s make it easy by giving it a label—I have autism.” 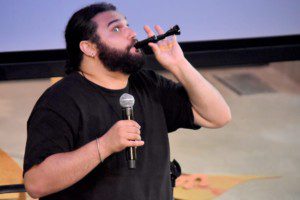 Dane Brandt Lubart broke out a kazoo while singing Always Look on the Bright Side of Life.

Dane’s solo show, My Life on the Spectrum, is a journey through the artist’s upbringing as he comes to embrace his diagnosis and share his talents and interests with the world. Dane, accompanied by his mom and co-writer Mia Brandt, his percussionist father Andre Lubart, and other musicians, performed the entire 30-minute show for his colleagues at Employment and Business Services – Brooklyn, where Dane is a member of the JCC Clubhouse.

The performance was held at BRIC, a cultural organization based in downtown Brooklyn. It was put on for free courtesy of BRIC’s Stoop Share program.

From Speech Class to the Stage

“The show began as an essay Dane did in a speech class,” said his mom Mia. “He used to be terrified to even say he had special needs.” That persuasive speech class culminated in Dane articulating the need to end popular use of the “R-word” due to its harmful effects on the psyches of people with disabilities. The speech was such a riveting personal moment that Dane and his mom, who for many years worked in film production for UNICEF, saw an opportunity to develop it into a larger piece with musical and other multimedia components.

Dane says in the show that he was diagnosed with autism at the age of four. “The doctor said that kids like me couldn’t feel emotions like love, that saying ‘I love you’ was just an empty, repetitive behavior. How could that doctor measure my capacity for love?” Dane spoke candidly about living with autism, identifying some of the key hallmarks that he exhibits. “I will share everything I know about [my favorite] topics. I can’t help it—my topics are just so wonderful I can’t talk about anything else,” he said.

Dane explained a paradox that despite autism causing him to struggle with certain social interactions, he enjoys new and old company. “I can see the uncomfortable turning away when people realize you’re different,” he said. “I know my social skills aren’t perfect, but l love people. I want to get to know you.” 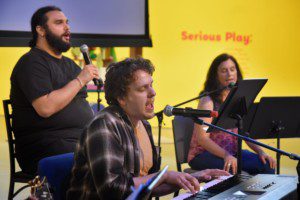 Pianist Roo O’Donnell sings with Dane Brandt Lubart and Mia Brandt in My Life on the Spectrum.

Monologues were interspersed with inventive covers of popular songs. A variety of musical genres were featured including Christina Aguilera’s “Beautiful” and Lady Gaga’s “Born This Way,” the Monty Python classic “Always Look on the Bright Side of Life,” Eric Clapton’s powerful ballad “Tears in Heaven,” which Dane dedicated to a young man with autism who was murdered by an abusive caregiver, and “Man in the Mirror” by Michael Jackson, which had everybody on the BRIC stoop singing along and dancing. He also dedicated a song to his life partner, saying that she and he “are enjoying life together now—on the spectrum, off the spectrum, and everywhere in between.”

Dane closes his performance with a reflective, inspiring message. “I’ve made it to 28. I’ve had my struggles, but I’ve moved forward in ways people could never imagine,” he said. He wants to continue to be a person that others can look up to. “We need dignity respect opportunities rights and protections. I think we need a revolution for the developmentally disabled and I want to be a part of it.” 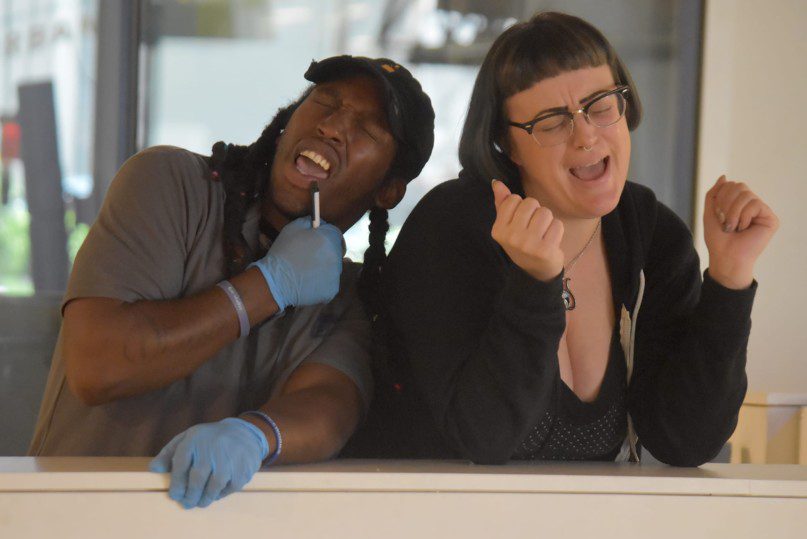 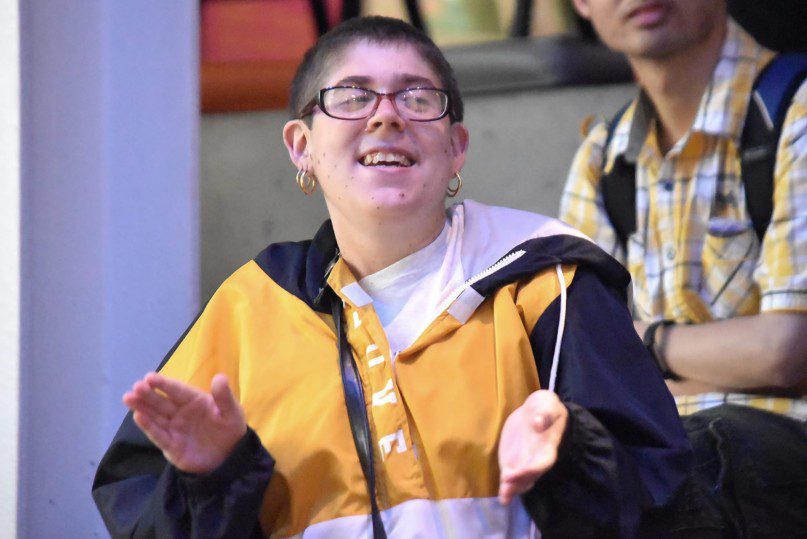