At long last, Walter Glasco has found a home. The 41-year-old from the South Bronx spent most of his adulthood jumping from couch to couch, from friend to friend, and, in the lowest moments, from homeless shelter to homeless shelter before gaining stability at Parkside Terrace, an affordable housing program that AHRC New York City collaborated on to ensure independent housing opportunities for nearly a dozen people with intellectual and developmental disabilities (I/DD). AHRC NYC has established a hub model at Parkside Terrace, creating a multi-faceted service center that provides support for tenants like Walter.

Walter grew up in the Bronx, raised by his mother and grandparents. “I wanted to follow in my grandfather’s footsteps,” Walter said. “He worked for a moving company and I saw how he was working hard. It was inspirational. If Grandpa could do it I knew I could do it.”

Walter began working in his teens while attending the Bronx School for Career Development, where he worked with “all kinds of mechanics, woodshop, tiles, and painting. The first job that I had gotten was air conditioning repair for a company in Hunts Point. I would get a stipend check for a hundred-and-something dollars.” Shortly thereafter, he began working for the city’s Meals on Wheels agency. The program Walter got this job through was shut down, and he was referred to AHRC NYC’s Employment and Business Services.

“Through AHRC, I worked at St. Dominic’s foster care center in the Bronx doing maintenance. The people there were great,” Walter said. After that job ended, he continued doing similar work in Manhattan and then switched to a mobile maintenance crew in Brooklyn cleaning some AHRC NYC facilities, impressing his superiors. “They saw how good I was, they saw I had experience here and there. I got a call from a manager when he offered me a position at the Staten Island Ferry.” He has worked at the ferry since 2007, now manning the midday-to-evening shift. 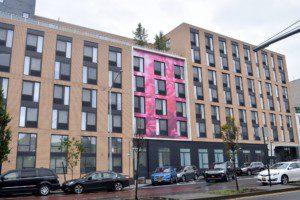 Parkside Terrace in the Bronx, where Walter Glasco now lives

Throughout this period, Walter lived wherever he could find an available room or a couch, but when he eventually ran out of rooms to stay in, he became homeless. “I had to go to a homeless shelter on 33rd Street, near Bellevue [Hospital Center],” Walter said. “It was like jail. You got to get up a six in the morning for breakfast, you get dressed, and when 8:00 comes, they kick you out and they come in and search everything. Every time you came into the shelter, you had to get searched. I witnessed a lot when I was there: hard-hitting criminals, war veterans that fought in ‘Nam. I heard a lot of stories. It was like a nightmare. I knew I had to get out of there.” At times, Walter was so cash-strapped he had to walk nearly six miles to and from the ferry terminal because he could not afford to use public transit.

A Place to Call His Own

Walter escaped the shelter system for a short period of time, renting couch space from a stranger in the Parkchester neighborhood of the Bronx, but his stay was short-lived. He again found himself homeless. “I had been sleeping in the train station but my co-workers told me it just wasn’t safe to do that. I didn’t want to go back to the shelter but I didn’t have a choice. After my last stay in the shelter system, my Care Manager told me ‘I’m going to get you in a good home, your own home,’” Walter recalled. “She said ‘I think I’ve got something for you but it’s through a lottery.’ I was overjoyed when I found out I got selected.”

Walter’s Care Manager, a former AHRC NYC employee, contacted AHRC NYC’s Director of Individualized Supports, Jennifer Teich, to ask for her help in securing an affordable place for Walter to call home. Walter moved into his studio apartment at Parkside Terrace on March 24th. “The people are nice in this neighborhood,” Walter said., “It’s quiet and nobody bothers me!” 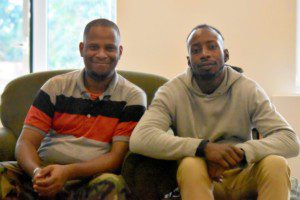 “Housing is a key component of the social determinants of health,” said Jennifer Teich. She added that of the dozen people from AHRC NYC now living at Parkside Terrace, about half of them have experienced homelessness. “Walter has a stable home, people who know and care about him, and a neighborhood where he belongs. He can now work, eat, and sleep on his own schedule. Having stable housing has allowed Walter to live the life that he wants in a safe and beautiful building.” Walter’s latest goal is to find employment opportunities in the Bronx, closer to his new home.

From the balcony of Parkside Terrace, Walter reflects on the journey that brought him home.

Looking back, Walter has been able to find some positives in his experiences with the shelter system. “When I was in the shelter, I was finally learning to save money,” he explained. “It taught me how to be more responsible when it comes to consistency with bills and paying on time. I was never good at that before then.” With AHRC NYC’s support, Walter is thriving in his own home. “It means a lot to have my own space now,” he said. “I’m learning something new every day.”