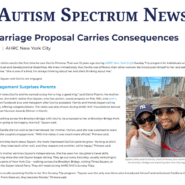 “The marriage penalty comes up a lot because people’s rights are being violated,” said Matthew Estep, AHRC NYC’s Self-Advocacy Advisor. “No one wants to be told you can’t get married (without risk to his/her benefits).”